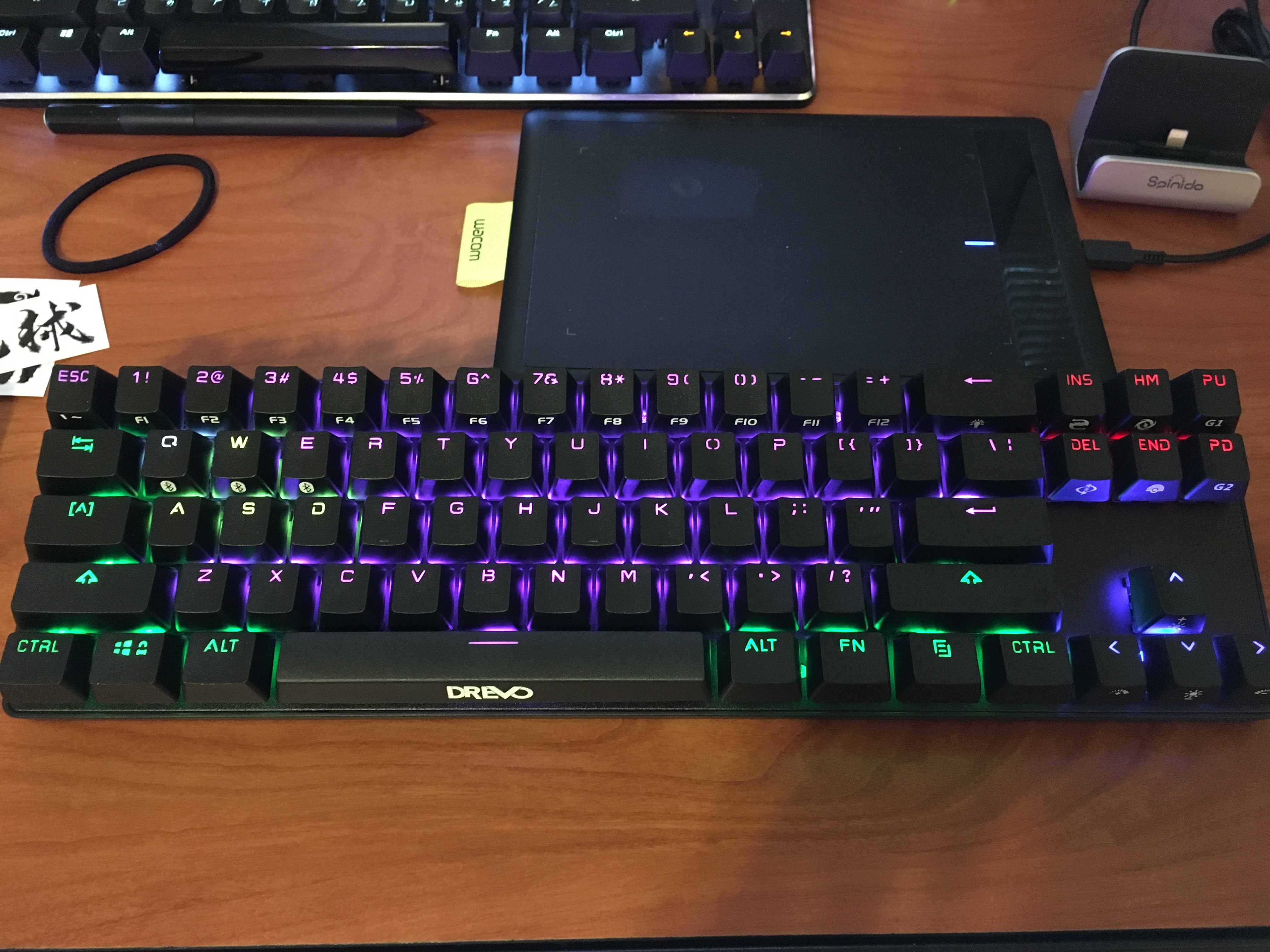 Review of the Keycool 71 RGB Keyboard

Question: What do this and this have in common?

Answer: They're the same keyboard!

Welcome to my review of the Keycool 71 RGB, also known as the Drevo Calibur. You may have read my other blog post in which I build my own wireless mechanical keyboard out of Logitech and Magicforce parts, but I'm not here to talk about that. I'm here to talk about a prebuilt package attempting to accomplish what I'd always wanted. On paper, it looks nice: dual mode Bluetooth/USB connectivity, clean 71 key layout, Outemu black switches with clear casings, an individually controllable LED for each key, and configurable lighting modes. But that's specs on paper. How does it perform in the real world?

So the first thing you'll find when you open up the packaging is that there is almost no packaging. As with most ChinaBoards you get the keyboard, a bare minimum cable, a keypuller in this case, and that's it. Neat package, but not much in the way or protection. Good thing nothing was damaged!

After removing the keyboard from the box, you'll find some stickers and an instruction sheet on the bottom. The instructions are written in passable English. The stickers are just ok... The first time you turn the keyboard on, this rainbow is what greets you. As stated on the instructions sheet, there are seven configurable lighting modes you can play around with, including snake, ripple, and breath. Each lighting mode can be configured to run faster or slower. There are also two memory buttons allowing the keyboard to remember specific color/pattern setups. Stateful buttons such as Caps Lock have a green "on" state. The green color cannot be changed. But enough about the lights, how are the switches? They're pretty good, actually. These Outemu Blacks seem to be very even and have a nice weight to them. Having tried Gateron Blacks, Cherry Reds, Blacks, and Kaihl Blacks (ranked best to worst), I would put them between Cherry Reds and Blacks. Of course, the keyboard's built contributed to the overall feel. There is absolutely no give or flex in the board. Typing bottoms out very nicely, and there are no "pings" to be heard anywhere. Now, let's begin the long process of transferring over my caps... And done! You'll no doubt notice missing keycaps. Those keys did not exist on the Magicforce. Fear not, I fill them in the next picture. You'll notice the space bar LED is green in the previous two pictures. This is because the keyboard was still on USB mode. It took one unsuccessful pair and just a tiny bit of confusion over instructions to figure out how to pair this keyboard via Bluetooth. But once paired, the green LED turned purple. So far so good, right! Don't cast judgement too soon. I'm here to tell you that the good stuff ends here. So how's the Bluetooth performance, you might ask?

I have no idea how Keycool or Drevo could ship such a horribly broken product. On macOS and iOS, any attempt to type above around 60wpm results in the following:

On Windows based systems, any attempt to type faster than 40wpm results in the following:

These are not exaggerations. These are actual samples. I'm not the only person experiencing this issue, either. Various reviews online have discussed similar topics. In fact, it seems that Keycool discontinued this keyboard shortly after their February 2016 Massdrop event. It just boggles my mind how something like this could have ever shipped. To anybody. Ever.

What's even more interesting is that USB mode works just fine. Polling rate seems pretty normal, and I can sit comfortably at around 125-130wpm without the keyboard dropping a letter. It's a real shame that the Bluetooth mode on this keyboard does not work, because it would have been an even better smaller form factor keyboard otherwise.