Here are my impressions of everything.

Today (09/21/2017) I went over to Acton's Headquarters in Santa Clara, California, and tested the Blink Qu4tro. I was invited the previous day via email, and the person I corresponded with was extremely nice and extremely prompt when responding. I'm writing this review for future Qu4tro owners as well as Acton engineers, who I'm also linking to this review. 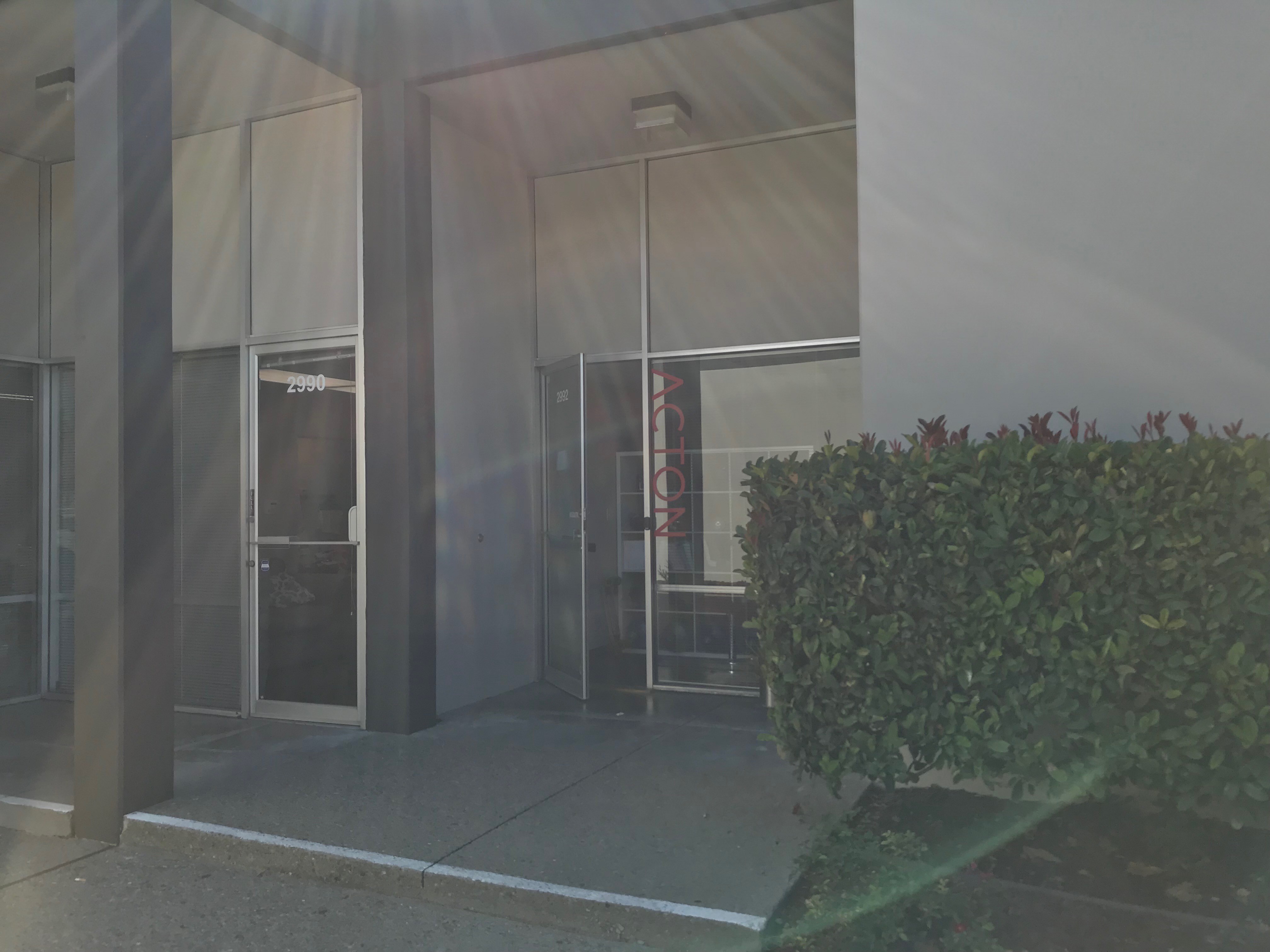 When I got there, there were two other people there, as well as a huge number of engineers gathered around. We were taken to the back through their prototyping garage, which contained all sorts of boards in half built states, including another Qu4tro with its internals spilling out.

Let's get the unimportant stuff out of the way first. Blink Lite was same old. The interesting stuff starts with the Blink S2.

What they basically did was put the "Avenue collaboration trucks" that were meant for the Qu4tro on the S2. Peter allowed us to ride this S2 while they were trying to fix the Qu4tro. More on this later. I'd previously ridden a production S2 and owned an S for half a year so I know what the originals are like. This was nothing like the original. While everything electronic stayed the same, the ride quality was completely changed by the spring suspension. I won't say it was ruined, but these trucks the way Acton has them currently configured are not meant to go on such a light board. You become completely disconnected from the road because you feel like it's all you can do to hang on. Turning radius was also ruined, but more on that later. Bottom line, suspension trucks on the Blink S2 will only appeal to extremely select people and will ruin the board for the vast majority. I have a feeling this won't make it to production.

The deck itself is constructed with three distinct sections. The front and back load bearing sections are constructed from cast aluminum. The mid section is constructed from seemingly the same material as the Blink extrusions. The deck itself is durable, but I don't think anybody doubted that, but just for anecdotal evidence, I'm a 125lb girl and jumping as hard as I could on the deck felt like I was jumping on the floor. That is to say, it's incredibly stiff. Some people will like that, some people won't. In the end, it'll be up to preference, but I don't think it's a huge deal. Compared alongside the Carbon GT's 40" deck, it seemed around 3" shorter, so I'd say the deck is around 36-37" in length.

What is a huge deal, however, is the weight. Due to the materials used, battery density due to power required, and just overall design decisions, the deck is heavy. Extremely heavy. And dense. Picking up the prototype feels like picking up one and a half Evolve Bamboo GTXs. If you imagine the weight of 1.5 GTXs but squeezed into a denser package, you'll get the Qu4tro. I even struggled a bit to pick one end of it up to turn around. It's that heavy. Peter says that they're still attempting to make the whole package lighter, and that they're using a different material than cast aluminum for the front and rear load bearing sections (he neglected to tell me what they're switching to) so hopefully production models will be lighter.

Now you might be thinking that weight doesn't matter if you're never picking it up. You'd be wrong. Part of what makes a board good overall, especially for eskates, is weight and trucks, which brings me to my next point. This is a huge point. The new suspension trucks. These trucks... boy... where to start...

Let me start by saying that they're not the same as the current Avenue longboard trucks that you can pick up from Avenue's online store. The trucks on the prototype boards that we got to ride were actually hand made prototypes based on the Avenue trucks. They rode extremely high, and did not really play well with the hangars. This by itself probably wouldn't have been too much of an issue, but combined with the weight of the deck and high center of gravity it forced, the board became basically uncarvable and unturnable. If you tried to carve, the bounce back from the springs would try to throw you off. If you tried to turn, the trucks would try to bounce back and you wouldn't be able to turn. It wasn't until I loosened the kingpin to basically unridable levels that I could turn 180 on a decently wide road, and even then, I could just barely do it. Basically, Acton needs to serious work on these trucks.

It's not all bad. I was assured by the engineering team that the spring curvature would resemble the Avenue ones more, which should mean less ridiculous spring and lower center of gravity, which in turn should help with reducing the effects of the weight which again in turn enables better carving and turning. I'll believe it when I see (ride) the production trucks.

The remote was surprisingly nice. It uses a thumbwheel system with no deadman trigger, and was not sensitive at all. The version of the remote I tested was definitely 3D printed, but it had a nice feel and heft to it. There's an indicator light on the bottom top facing side of the remote that blinks to indicate battery life and board status. It's akin to the status indicator of the Yuneec E-go remotes, which is to say that getting your current status while riding by reading colors and counting blinks will get annoying. Right underneath the indicator light is the on/off switch. Connection, as with the other Blink series boards, is instantaneous. There's no mode switching on the controller still. Mode switching has to be done from the app.

Ergonomics of the remote is mostly ace, or at least the part you grip is ace. I'm not sure why they're keeping the top and bottom portions that stick out if the controller doesn't act as a pull handle anymore, as all it does now is look weird and keep the controller from comfortably fitting in my pocket or purse. There were no controller related cutouts while I was riding the board hard. (There were definitely points where I lost control completely but I'll get to that later)

As much as I was able to, I tried to do as scientific of tests as possible. I was only able to measure extremely limited measurements, but I'll do my best to describe to you results of my tests as best I can.

Acceleration curves on Normal mode was nice and easy. Acceleration on Pro mode was still nice, definitely feels more like the Raptor 2 acceleration curve and not the "Extreme G-Force" acceleration on the GT modes on Evolve boards. I think Acton nailed this aspect of the board's UX, but I could see myself missing the exhilaration of the GT mode's full power at 0 seconds. Peter says that's not the market they're targeting, so I'm not going to argue with that.

The dozens of times I went from full standstill to max speed, there were only a couple of times where it felt like the acceleration curve was uneven. I could chalk it up to prototypes not having the fully completed power delivery system, but that and other issues I'll describe later makes me worried.

My speedometer said 22mph. That's on the 88mms Acton had on the demo board. Compared to the 27mph measured on my CGT with 97mms on the same exact course. 3 repeated tests produce the same results. It's "fast enough" for most people, but definitely not the fastest.

In normal mode, braking was fine. It slows you down to a complete stop pretty gradually, so you don't have to worry about being thrown off. At the same time, don't expect the braking to save you from oncoming traffic if you're trying to stop at an intersection and you don't know how to footbrake. In pro mode, braking at full charge will shut down the board. This happened twice. Once before the Facebook live stream, and once during the Facebook live stream. If you were watching, I was all the way at the end of the road near the turnaround and an engineer had to run and fetch the board. As I explained to both Peter and the engineers, this happens on the Blink S and Blink S2 and can easily be fixed with an overcharge resistor. The resistor would convert energy into heat which you can pipe into the all metal frame of the Qu4tro. This issue is even more crucial with the Qu4tro because instead of two motors pumping regen charge into the system, there's now four. Twice the amount of power, twice the likelyhood of shutdown. I stressed this point to Peter and the engineering team there multiple times since there's such a huge increase in risk of death. They said they'd fix it. If they don't by launch time, y'all know it's not because I didn't try.

After the shutdown incidents, they didn't let me back onto Pro mode, so I ran the rest of the tests in Normal mode. Stress handling, where you accelerate to full speed then brake to a complete stop, is often used to test systems such as eskates where large amounts of power is transferred to and from various parts of the system. Doing this in Normal mode revealed no problems, but of course our concern here is Pro mode.

Please see my thoughts above on the truck setup. No accurate tests could be performed.

I didn't get to directly race the two boards against each other, but I did let the Acton engineers try the CGT. I'm not sure if they knew that Mandarin was my native language, but they were talking amongst themselves after trying the CGT and the phrases "insane acceleration", "way faster", and "crazy" got thrown around a lot so I'm going to assume they were reasonably impressed. I did find it strange that they apparently had no idea companies like Evolve or Enertion even existed. It seems to me that if you're going to build a product that's supposed to compete in this kind of market, you'd at least try stuff from other companies... Anyways, from my personal testing, there's really no comparison. Both acceleration and top speed on the CGT blows the Qu4tro away.

See my earlier section on this. I will add though that they were actually quite stable at high speeds. Might have to do with the weight of the board though.

Feel free to ask my any questions in the comments and I'll try my best to answer.