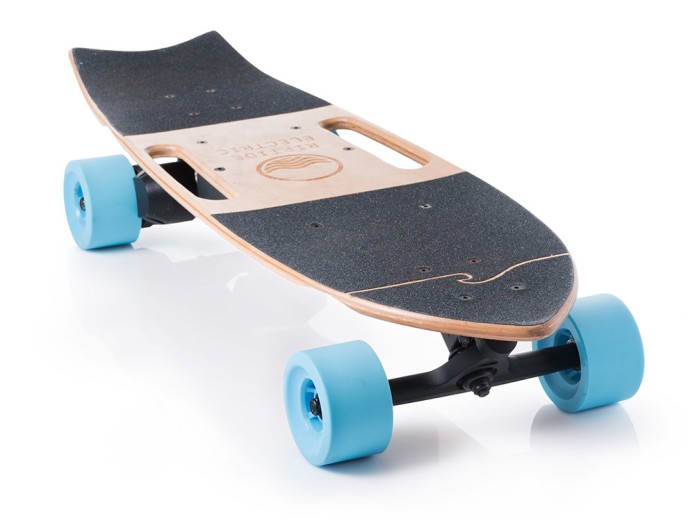 Here are my impressions of everything.

Yesterday (09/30/17) I rolled myself down to the Embarcadero in San Francisco at 2PM to attend the Riptide Ridealong, which was an event that /u/spooky_ghost, someone who I frequently skate with, set up in conjunction with the Riptide folks. I'd been looking forward to this event, as I really wanted to try out the Riptide R1, which was one of the extremely few recent boards that list realistic specs and set seemingly realistic expectations.

During the ridealong, I was able to get a huge amount of unfiltered access to the board. I'd swapped boards with Eric, CEO of Riptide/Shredlights, so was able to ride the R1 about 4.5 miles through all types of terrain, especially significant hills and extremely rough roads. My deepest apologies to Eric, I hope you weren't freaking out too much when us in the back disappeared... We headed to Last Mile SF as stated on the schedule after we lost you guys in front!

This is a fun board. There's no other way to describe it. It's clear that Eric and co. know their target demographic, and know them well. The board itself has this stout, chubby build and look, which makes it really endearing and feel really sturdy. The deck length is about 31" so it's not really the most comfortable board for long rides (my legs were completely numb three miles into my long ride), but if you're looking to bang up and down some waterside paths or a park path, it will do just fine. The dual motor setup is adequately powerful for something this small, and is actually quite torquey. Although it's not going to beat anything else off the line, during my times riding I've actually been thrown off the back a couple of times due to the acceleration, though this is also in part due to another issue which I will highlight later. Throughout my ride, up and down hills, I was constantly worried that the board would not be able to make it up or brake properly going down, but those worries were unfounded as the board performed admirably even when the road got extremely potholey and rough.

I think it will be great having a board this small. You can take it anywhere, and I do mean anywhere, as it comes in under airline battery restrictions. I'm a frequent traveler, and while I don't plan on bringing any boards with me anytime soon, I can imagine other people would want to. It's easy to throw this board in a variety of places.

The options for where to throw this thing is endless.

Having a proper kicktail means that you can now do so much more due to the increased maneuverability. Turning a tight corner is now not a problem. If you're strong and heavy enough, you can also try and do ollies, or hit up skate parks. Eric said that one of the goals for the bottom electronics enclosure was for it to be strong enough to take regular beatings, so I can imagine people more skilled than I pulling off proper tricks on this thing.

The remote is the same as the Meepo remote, that is to say it's nothing special. It works. There's a thumbdial for acceleration and deceleration. Right under that is the switch for low/high power mode. At the bottom of the remote is the on/off switch. Holding the remote in your right hand, on the left surface you'll find your battery indicator and forward/reverse button. It's worth noting that the battery indicator here has three dots, while the indicator on the board itself has four bars. It's an odd inconsistency, and made it confusing for me to gauge just how much power the board actually had at a given time. At one point, I saw one dot on the remote but two dots on the board, which made it really confusing for me to plan my route to the next destination. Eric did make it clear that they were using off the shelf parts, so I imagine there's not that much leeway in what he gets to customize.

Another issue with the remote, and I think the biggest one, was responsiveness. There is extremely noticeable lagtime between action and response, which is not a good thing when you're on a board like this. Since balancing is paramount on a smaller deck, you're constantly shifting your weight to get the best footing for every situation. Because you're doing so much work to keep yourself upright, you trust the board to help you. But in the case of the laggy remote, it becomes very hard to trust the remote to provide the correct amount of power at the correct time when it's unpredictable when the remote will lag and when it won't. I believe this inconsistent power delivery is the issue at the heart of why I got thrown off those couple of times, and Riptide does need to fix this as a high priority issue.

As much as I was able to, I tried to do as scientific of tests as possible. I was only able to measure extremely limited measurements, but I'll do my best to describe to you results of my tests as best I can. It is worth noting that I did these tests when the battery was at around 50-60%.

On normal mode, acceleration was slow and easy. Nothing to see here. On pro mode, acceleration was still nice, but there were some weird starting jutters. It felt like grinding gears a bit. I'm not sure what it was, but it only manifested sometimes. It's a little bit disturbing, especially when going uphill as you don't feel that power delivery when the grinding happens, but I'll chalk it up to prototype weirdness.

I did my 0 to full speed acceleration test eight times in quick succession. About three times out of those eight, I encountered different acceleration curves because the remote lagged when I gunned it from a full stop. This further highlights the remote/power delivery issue. I really hope they fix it.

My speedometer said 17. That's close enough to their advertised 18mph top speed that I believe their claims. Maybe the board would have had just slightly enough power to hit 18 on full charge. Of course this isn't the fastest board out there, but it's quite fast for a small board.

Braking is pretty good. There doesn't seem to be a perceivable different between normal mode braking and pro mode braking. Both bring you to a stop from top speed at a reasonable distance, and is gentle enough that you won't get thrown off the board. It does not have a short braking distance though, so definitely keep that in mind in relation to your speed when navigating through areas with dense traffic.

One aspect of braking that I did not test was braking at 100% battery. Eric informed me that they do not yet have a solution for braking at 100% battery, but are working with their manufacturer to come up with one. I believe braking is one of the paramount issues to eskate safety today, so the fact that it was not part of the design from the get go worries me a bit. However, since I don't have visibility into Riptide's design process, I can't comment very much on that. I just hope they are able to fix the issue in the final production boards because they really are risking injury to the rider.

Stress handling tests involve continuously taking the board to full throttle immediately from a completely standstill, immediately braking, then immediately accelerating again in a loop. I did the cycle 10 times each on flat ground in a parking lot and 10 times on slightly sloped ground going down and up. I'm happy to report that the R1 exhibited no problems during any of these situations except for the issues I illustrated above.

The R1 is capable of performing some sharp turns. There are wheel wells on the underside of the deck to facilitate really deep carves, which is great. Personally, I wasn't a huge fan of the bushings they used, which seemed rather stiff to me, but that's not really an issue since bushing can be swapped out easily depending on personal preference. No problems here!

I didn't get to race the R1 directly against a boosted board, but having ridden both V1 and V2 BBs, I think the R1 would pretty much match the capabilities. There's no point pitting it against any higher powered boards because that's not their market. Eric specifically stated that he imagined the R1 to be people's secondary board for shorter rides where large boards are overkill, and I respect that. I will say however, having owned a Blink S, this is much better.

One major thing to note is that Riptide is using off the shelf parts for almost all parts of this board. This means that Riptide is relying on the parts themselves to be tested and proven durable instead of the board as a whole, though I'm sure they've done durability tests on the board itself. This also means that you won't be finding anything new here in terms of performance and hardware. While the deck may change the riding characteristics of the board, if you're not new to the eboard industry and have tested many boards, this board will feel like the many that have come before. This is not a bad thing, and indeed may be a good thing for some. This means the board is predictable, and you'll be able to find documentation and replacements for nearly all parts found on the board for cheap when your warranty runs out. This also means that many of you might call this board another "China Board" and while you are not wrong, I don't think you're entirely right either. Yes, there are many horrible mass production "boards" out there. However, there are some good or even great mass production boards that use some of the same parts. Does that mean that the great boards should be lumped in with the other bad ones that share the same parts? I don't really think so.

I'm not trying to defend Riptide here. I too would rather see something that's purpose designed and built with custom parts. That's just not feasible for a small company, unfortunately, and I don't blame Riptide for using resources at their disposal. At the end of the day, what they're playing here is a mix and match game, and I think they've hit on a pretty great match.

Feel free to ask me any questions in the comments. I'll try my best to answer!